Statistics
:::Home > About Us > Introduction 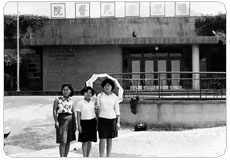 Located within Puli basin, Puli Veterans Hospital (PVH) is approximately one mile from Taiwan Geographic Center, the central point of Taiwan. It can be reached within 20 min by car from the scenic route to Sun Moon Lake in the Wushe area. Surrounded by scenery hills and mountains, PVH is almost free from factory pollution and known to have comfortable climate and fresh water. 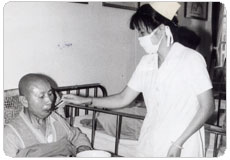 In the fall of 1957, the Veterans Affairs Commission (VAC) of the Republic of China co-opted the land used by the 2nd aftercare battalion of the ROC army to build the buildings for this hospital as a way to implement the policy of veteran aftercare. The construction of those buildings was done in the summer of 1958. On July 1st of the same year, it was officially named “Puli Veterans Hospital of Taiwan”. In June 1960, PVH began its policlinic service in the downtown of Puli Township. On March 20th, 1963, under the command of the VAC, the words “of Taiwan” were deleted from the official name of the hospital; and its full name became “Puli Veterans Hospital, VAC, Executive Yuan”. In July, 1969, the Lishan Branch of PVH was established. On September 1st, 1985, the Lishan Branch of PVH was ordered to transfer its affiliation to the Taichung Branch of Veterans General Hospital (known as Taichung Veterans General Hospital today), the name of the branch was also changed to Lishan Medical Center, Veterans General Hospital, Taichung Branch. 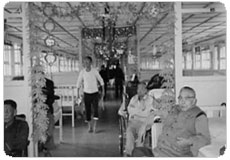 Originally, PVH was assessed as a treating hospital for tuberculosis and was designed to take care of tuberculosis patients from the former 2nd aftercare battalion of the army. PVH also began to receive new tuberculosis patients since its opening and treated them with standard tuberculosis treatment procedure. In the beginning, PVH contained 500 sickbeds and was ordered to expand to 1000 sickbeds in 1963. Some of the wooden wards were ordered to suspend their service in 1972 due to safety concerns, so the capacity was then reduced to 666 sickbeds. In 1978, all the tuberculosis patients in PVH were transferred to Wanciao Tuberculosis Hospital, and PVH was modified to be a general hospital. In 1980, the authorities assessed PVH as a 700-sickbed hospital. PVH then set up its paralysis ward in 1981 to improve its service to veterans suffering from paralysis. The capacity of the hospital was then expanded to 760 sickbeds in July, 1982; 60 of those were reserved specially for patients transferred from various clinics nearby. On July 18th, 1995, the Department of Health assessed that the capacity of PVH was 800 sickbeds, including 180 for general wards, 20 for acute psychosis wards, and 600 for chronic disease wards. 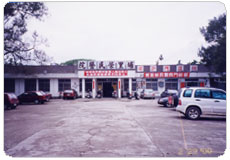 In the beginning, PVH received 8 small wooden wards along with affiliated buildings like offices, an auditorium and a kitchen. VAC also helped build 4 wards with brick walls, a policlinic building, an operation room, a warehouse and a staff dormitory through official bidding process. In 1963, PVH was ordered to expand its capacity and 3 large wards were built for that. A medical supply room, a boiler room, a nurses’ dormitory and a ward for generals were also built soon after that. In 1983, the construction of a general auditorium and a two-story ward was accomplished. In 1986, 2 more two-story wards, a modern kitchen and a doctor’s dormitory were built; along with those buildings, the Veteran’s Garden was also built for the recreation of our patients. At that time, all the important buildings PVH needed were completed. In 1990, PVH was granted by the authorities to be enlisted as a part in the “Phase-2 Project for National Medical Network” in the 6-Year National Construction Agenda and was given an opportunity to make itself a truly grand modern hospital. In 1992, the construction for the General Medical Building started. In March 1993, the Hemodialysis Center began to provide its service to all patients who need that service. In 1995, all the new constructions projects were completed. In 1996, the General Medical Building was officially opened for service. In 1999, new sets of dormitories were completed; the inter-connective corridor, the Pathological Anatomy Room and the deep-water well processor were also accomplished. On September 21 of the same year, a major earthquake with its epicenter in nearby area caused tremendous damages to some of the buildings in PVH. The restoration projects for the General Policlinic Building and the Chronic Psychiatric Ward were accomplished in the year 2000. In 2003, the construction of Green Housing, school improvement project, the new library and research room, the corridor on the second floor and the expansion of Intensive Care Unit were all completed. 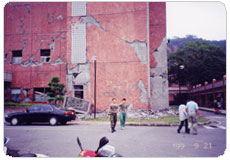 The first superintendent of PVH was Mr. Shu-ben Wu. Although Mr. Wu only served for a year, he not only established important institutions for PVH but also contributed much to the design of the hospital. The second superintendent was Mr. Ji-xian Zhu; he served as the superintendent of PVH for 17 years. He finished the construction projects for staff dormitory, nurse’s dormitory, the auditorium, veteran’s kitchen and the clinic for civilian outpatients. He was also in charge of the establishment of the Lishan Branch in 1969; he truly laid the foundation for all the important infrastructure in PVH. The third superintendent was Mr. Jhong-min Jhu, who served for 12 years in PVH. Aside from finishing the construction of the General Auditorium, two two-story wards and the doctor’s dormitory, he also paid attention to the recreational needs of the patients. For that, he constructed the Veterans’ Garden installed televisions inside veterans’ wards and established the first library in PVH. His contribution and care to veteran patients received compliments from all sides. The fourth superintendent was Mr. Jia-mo Peng, who served for 7 years in PVH. During his term, he added a tremendous quantity of medical facilities and recruited many professional talents to work in PVH, expanding the original 3 departments of policlinic services (medicine, surgery and dentistry) to 18 departments (including neurosurgery). He also helped promote PVH from a general hospital to a regional teaching hospital. In 1990, he personally designed and supervised the improvement construction project of the whole hospital and successfully gave PVH a brand new look. The fifth superintendent was Mr. Shan-zhang Zhao, who served for 3 and half years in PVH. During his term, we moved into the new building, restored some old buildings, roads in the peripheral area and the parking lot. He also constructed 6 dormitories, the Biological Anatomy Room, the Psychiatric Building, the Chung Cheng Park, a garage, a water purifying unit, the fence around PVH and the demolishment of some old buildings. He also planted various flowers and tree to make PVH look more like a garden than a hospital. He also added the policlinics for neurosurgery, psychiatrics and oncology so that we could provide a more comprehensive service to the people in the Puli region. Furthermore, all construction projects completed during his terms survived the September 21st earthquake in 1999. The sixth superintendent was Mr. Ji-yuan Xiao, who served for 6 years. During his term, PVH experienced several major natural disasters such as the great earthquake in 1999, the outbreak of SARS, the flood caused by Typhoon Mindulle and the collapse of Ling Yan Mountain Temple. Under his orderly command, PVH was soon back on its feet. Besides recruiting many distinguished physicians into the health team, he also constructed the acute, chronic and day-care psychiatric wards, as well as the respiratory wards. The seventh superintendent, Dr. Lin Ho, served for three years. During this term, he focused on the promotion of the community healthcare. In 2006, PLVH successfully passed many accreditations and certifications, 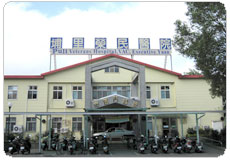 such as the hospital accreditation, HACCP certification, TAF and ISO:15189 accreditation. In addition, he introduced many new technology and instruments into medicine, such as MRI, CT scan, ESWL. He also established new services, such as cosmetic center, traditional Chinese medicine, nursing home, and methadone treatment program. Under his leadership, the quality of the healthcare has been greatly improved in PLVH. 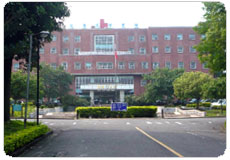 In 2008, Dr. Ping-wing Lui served in Puli Branch Taichung Veterans General Hospital (PB-TCVH) as the eighth superintendent. He was a postgraduate in National Yang-Ming University where he obtained a master degree in the Institute of Hospital and Health Care Administration, as well as a Ph.D. degree in the Institute of Clinical Medicine. He was the superintendent in Su-ao Veterans Hospital before he served in PB-TCVH. During his office, he actively initiated the heart-touching service in the healthcare, making PB-TCVH as one of the hospitals filled with vitality. In response to the difficulties in the Taiwan Healthcare System such as global budget and DRG implementation, he hope we can work together in the accomplishment of our mission – "To become forever the best and managed community hospital."

Under the policy of vertical integration in the healthcare of VAC, Puli Veterans Hospital has been corperated by Taichung Veterans General Hospital in the beginning of January 2012. The quality of healthcare will be greatly anticipated within the great Puli region.